Role of the land-owner

The sites for most solar projects are selected by the developer on the basis of their topography, solar regime, access to suitable grid connections and similar parameters.

When a suitable site is found, the owner is in most cases offered a lease for the use of the land for the duration of the project. In some cases the project developer or owner might seek to purchase the land.

For the reasons highlighted on the left, the land ownership for solar projects tends to be dictated by local circumstances rather than a widespread strategic approach by the land-owners.

The Wiki-Solar Database holds details of the landowner, where known, and it is shown on the maps. However this only applies to a small percentage of projects, so the following table (from late 2021) carries little weight.

Few land-owners (apart from government departments and utilities perhaps) have a sufficiently widespread land bank to be able to support more than a few isolated projects. Most listed land-owners are likely to be the pre-existing owners of specific plots which developers have identified as suitable sites.

A special case is property owners who wish to take a significant part of the power produced by the solar generating station. Several roof-top and ground-mounted projects have been developed on this basis, often referred to as 'net metering' or 'self-consumption' applications as further described here. 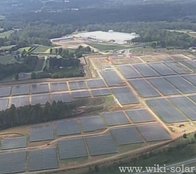