What is a project developer?

The project developer typically initiates new solar power projects and owns them during at least the early stages of development. This would usually include site selection, including negotiations with the landowner, and the initial designerating station.

The developer will usually handle the consenting process both for planning approval and grid connection, and often also appoints the EPC contractor and identifies the preferred power off-taker.

Some project developers retain ownership of projects they have developed, but many will sell them on to a new owner before, during or after construction.

Where the developer retains the project during the construction phase, it will normally seek to finance part of the cost through non-equity finance.

The project developer is known for some, but not all, of the projects on Wiki-Solar's database. Therefore, as noted below the table some figures will be under-stated. However, several of the leading participants confirm details of their portfolio to Wiki-Solar (and you can too - see the bottom left of this page).

Because capacity is included in these figures only when the plant is connected, the total capacity now developed by many of those listed will be higher.

Some developers in this list also fulfil other roles in utility-scale projects. The figures quoted here apply only to their project development activities. Where companies have maps, however, these will show all their projects.

The most recently published list of the top-ranked utility-scale solar project developers is shown below. Maps are available for many of these companies using the Developer pull-down menu above.

This shows the position in the second quarter of 2022. 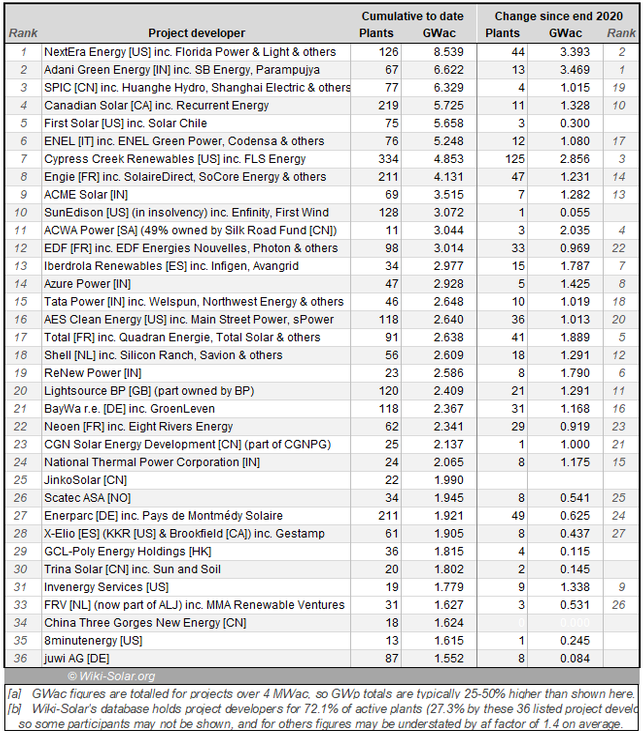